Public schools are designed to streamline thought patterns, fostering mediocrity instead of developing the greatness within each child. Freedom and democracy, the guiding principles behind our constitution are now merely romantic ideals, thanks to generations of forced schooling and one-size-fits-all curriculum. Standardized teaching brainwashes children away from independent thought and into a life of servitude and consumption, instead of conditioning young citizens to live as active and liberated participants in a democracy. Compulsory attendance requirements have been the downfall of democracy in the US and in order to reclaim “the land of the free,” we must insist upon ending the failed experiment of forced schooling. 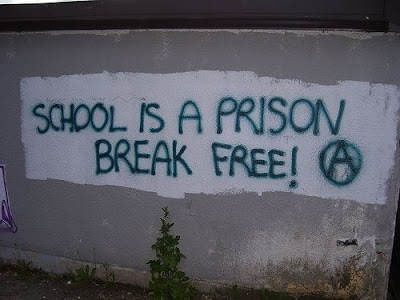 The founding fathers of the United States were farmers. It wasn’t a group of highly educated attorneys or professors who wrote the US Constitution and the Bill of Rights. They were self-educated and inspired by the excitement and passion of beginning a new nation, “conceived in liberty.” The underlying principles behind the founding of the United States were personal freedom, and democracy. That spirit of freedom and liberty stayed with the citizens of the US for many years. So much so, that when the first compulsory attendance laws were proposed in Massachusetts, requiring boys to attend public schools for at least six consecutive weeks every year, citizens were irate. “This is a free country,” they argued.

What’s happened over the past 160 years, that US citizens no longer feel that their freedom is at stake when the government insists upon indoctrinating children during 40 weeks of compulsory schooling every year, for every child? Quite simply, modern Americans don’t know any better. The spirit of personal freedom is dead, or at the very least, irrelevant. Liberty is just a word engraved on pennies. Democracy means we can vote when we reach the magical age of 18. Schooling enforced by truant officers has taught American youth that learning is difficult, that people are not to be trusted with their own minds, and that freedom is a third grade vocabulary word. School lunch - let's train them to LIKE shitty food

homeschooling which prove that a classroom style education isn’t necessary for academic success.
Attendance laws range so much across the country that children are required to start school as young as 5 in some states and up to age 8 in others. The range at which required schooling ends is also varied, in some states students may leave at age 16 while other states require they stay in
attendance until they’ve finished 12th grade or reached age 18 (NCSL). The trivial age divisions make it clear that these laws aren’t designed to meet the needs of the individual students, but the
bureaucracy.

Children learn more when they're not imprisoned

Compulsory schooling has a lot of support. Teacher’s unions, standardized testing services and
corporations that sell curricula tend to like compulsory attendance laws, it means their jobs are
secure. US citizens who have experienced compulsory schooling can’t imagine a different childhood. They argue that every child deserves an education and that the state has a responsibility to provide that education.

However, throughout the history of life on earth, humans in each generation all over the world were learning, even before compulsory attendance laws forced them into classrooms. Without forced schooling, Benjamin Franklin, George Washington, Abraham Lincoln, John Adams and others were able to learn enough about politics, psychology and language to write the documents that many “educated” Americans aren’t even able to read today.

Come on kids, let's go for a ride

Home-based education with or without a classroom-style curriculum has grown in popularity in the US in recent years, as an “alternative” method of preparing children for their adult lives. At one time, it was taken for granted that humans are capable of learning what they need to know and parental focus was placed on citizenship and work ethic, not the advancement through arbitrary grades. The
types of education that we call “alternative” were not considered alternative before forced schooling.

For example, the Thomas Jefferson Method of home-based education relies on an adult or mentor who guides the child through a series of literary discussions and essays. Unschooling is a method of homeschooling whereby a child’s interests are embraced as

How sick and twisted is it that we have an entire INDUSTRY devoted to putting people in jail?

the driving force behind a self-designed education; learning occurs as a side-effect of exploring one’s interests, rather than as the primary goal. Waldorf schools immerse children in the natural world and focus more on the child’s experiences and communication skills, rather than on the memorization of facts. Democratic schools are governed entirely by vote and children’s votes count just as much as that of the teachers and parents. Free schools, like the Sudbury school in England, allow children the freedom to choose which classes they’ll take, if they take any at all (Gray 110).

Each of these methods are backed by various child development experts and academic test scores, yet none of them rely on forced attendance or striving to meet standardized objectives. Mortimer Adler, a historian and philosopher concerned with public schooling practices, warned that education should not be designed to create a workforce. He used the Ancient Greeks as an example that thinking skills in a democracy are best developed by rhetoric and discourse (Adler). Schooling in ancient Greece was a matter of voluntary conversations, rather than forced work.

Forced attendance can’t be taken seriously as the best way to learn, when homeschooling, democratic schools, free schools and the other “alternatives” provide children with opportunities to learn, albeit in an environment that American adults aren’t familiar with (Gray 6). Additionally, very few parents would actually deny their kids an education. The offspring of a family that refuses forced schooling aren’t made smarter by ticketing, fines or sending the parents to jail. Indeed, the psychological trauma could very well cause more harm to a child than the absence of formal teaching.

Freedom - it's NOT ABOUT WAR

Because compulsory schooling has only been around for a short time, we must look at the way intelligent societies engaged in learning throughout history. Babies aren’t taught to walk or talk, they simply do it, motivated by an inner desire. During periods of leisure, humans are still learning. It’s not necessary or effective to insist a person learn according to an arbitrary plan, learning never stops. Standardized learning as a result of standardized teaching is not probable. The goal of giving each child an equal body of knowledge is delusional.

Ivan Illich’s “learning web” ideology of a self-directed education (Illich) has been vindicated 50 years after publishing Deschooling Society. It might not reflect everyone’s learning preference, but it definitely exists and is just as effective as he predicted. Informal online “study groups” are formed every day, all over the globe, when people share their ideas, passions, interests and favorite books. Blogs, social networks and message boards allow for the free exchange of ideas and fuel people’s natural desire for knowledge and intellectual interaction at every level, without dividing people into age groups or assigning a “teacher.” The idea of presuming that a classroom experience is a necessary component of education is far-fetched.

Compulsory schooling ensures that focus is placed on meeting the needs of the government, not

Uncle Sam, as Santa, says "I want you to shop"

the individual child. How many children strive to participate in global trade wars when they grow up?Most just want to be mommies, firefighters, farmers, police, doctors, or otherwise engage in occupations that make a tangible difference in the community.

The report Tough Choices for Tough Times has been embraced by corporations and educators and is currently shaping school reform activities across the US. It outlines a plan for turning American students into a “think tank” for a global network of products and services as well as the primary consumers of these products and services, which are to be assembled in factories and sweatshops in less developed countries (NCSAW p6). Shut up and shop, this is America

How much joy has excessive consumerism brought to the lives of Americans? When we see our tax dollars used to bail out banks & auto makers, we must ask ourselves these tough questions. Do we really want our children’s minds systematically groomed to participate in a worldwide economy that depends on American shopping habits? Is it ethical for American businesses to infiltrate the educational system by lobbying for a curricula that teaches children to strive for increased consumption of natural resources at the expense of cheap labor in smaller nations?

Modern children deserve the same liberty and freedom our founding families had. Many Americans agree that the government has its hands in too many aspects of our daily lives. Generations of compulsory schooling have made it difficult for people to see that enslaving children in schools has led to a culture of adults who fantasize about personal freedom while working to fund government and corporate interests.

How does the state see your child?

reclaiming America as a civil society created by the people and for the people. Forcing every child to strive for mediocrity will not create an intelligent society. Ending compulsory attendance in favor of community-based learning environments where everyone has access to information, mentors and learning tools, whether in the classroom, at the library or in their living room, is the only way for a freedom loving society to end the madness.

“Executive Summary; Tough Choices or Tough Times”. New Commission on the Skills of the American Workforce. 8-12-10 .

Gray, Peter and Feldman, Jay. “Playing in the zone of proximal development: Qualities of Self-Directed Age Mixing Between Adolescents and Young Children at a Democratic School.” American Journal of Education February 2004: 108-145